From the name of a 14th century English politician, Henry Labouchère, the Labouchère betting system is very popular and has always fascinated for its mathematical subtlety and apparent complexity.

Although it remains difficult to apply in real conditions because it requires a rigor in its progression, the Labouchère method is very simple to understand. Like the other systems with negative progression (Classic Martingale, Fibonacci or d’Alembert), the Labouchère system allows to erase the losses by increasing the bets, but its peculiarity is that it does not erase all the losses with a single win but a package of several small winnings.

Rules of the Labouchère method

Although it can be applied to any type of betting; sports, horse racing or even in trading, the Labouchère bet system works better with double odds, the same chances of loss or gain as with roulette.

Before starting, the first thing to do is to divide the unit of betting into a sequence of numbers. Theoretically, the gambler is free to choose the division he wants. We will see later the importance of the distribution of this sequence.

For example, for a bet unit of $10, a possible division is 1-2-3-4. The sum of these four numbers equals 10. Note this sequence before you start.

A clear example is the best way to understand this system :

The concept of cycle is the principle of the Labouchère strategy, regardless of the length of the cycle, at the end of it, the gambler would have won the amount of his starting bet.

The biggest advantage of the Labouchère method is its flexibility. By adjusting the starting sequence, the gambler can control the level of risk or increase his potential profit by using large numbers in the sequence. The risk of the bet amout going up after a series of losses can be reduced by inserting zeros into the chain.

In theory, the Labouchère betting system makes it possible to make a profit even if it achieves fewer winning bets than losing bets. But it has a disadvantage, it is slow! It is often necessary to chain a long cycle before generating profit.

Another disadvantage common to all the negative progression methods such as the Classic Martingale, or d’Alembert system, is the uncertainty of the game. A series of successive losses can very quickly increase the amount of stakes in a Labouchère sequence. Certainly less than in the Classic Martingale, but enough to explode the gambler’s bankroll.

The flexibility of the Labouchère betting system lies in the possibilities of infinite combinations by changing the starting sequence and the odds used (in sports betting for example, football, basketball, baseball, hockey, tennis …).

GSimulator makes it possible to launch a simulation of the Labouchère strategy under real conditions with the possibility of changing in real time several parameters such as starting bet, odds other than 2, number of repetitions or even the limit of the bankroll. The simulator also provides the tools needed to analyze results and compare cost differences with other strategies.

Start a free simulation of the Labouchère strategy in the GSimulator or consult the documentation for more informations.

Unlock the power of the GSimulator 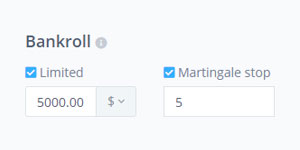 Gambling in real conditions with a limited Bankroll and stop conditions for martingales. 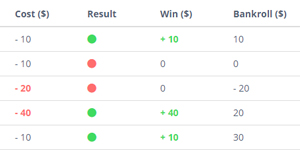 Explore the evolution of the strategy and the results of the bets in a table detailing the costs, the profits and losses of each bet. 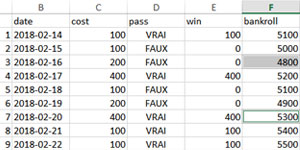 Export all data in Excel, CSV or HTML formats to go further in the analyzes and to process and compare different configurations.

Enjoy the GSimulator unlimited and without ads